GET READY NOW FOR THE 2022 HURRICANE SEASON CSU released its official 2022 outlook on April 7, followed in May by the National Hurricane Center’s first detailed season forecast.  Both will reflect more conclusive environmental data and an expanded understanding of how climate change makes hurricanes stronger, bigger, wetter, and more dangerous.

On December 9th, scientists at the Colorado State University (CSU) Meteorology Project released their initial outlook for the 2022 Atlantic Hurricane Season, which starts on June 1st.  Their conclusion? The Gulf Coast and Eastern Seaboard should prepare for the sixth consecutive above-normal hurricane season.

Many communities and families  — from the Gulf Coast, across the Southeast, and up the Atlantic Coast — are paying close attention to these early predictions as they continue to recover from 2021’s Hurricane Ida, one of the most damaging hurricanes on record in the U.S.

Last May, after a four-year gap, the Environmental Protection Agency (EPA) released its first comprehensively updated data on climate change, adding twelve new climate change indicators and several years of data. This data is not only allowing scientists better predict how tropical storms and hurricanes will behave, but it is also helping the public “connect the dots” to make sense of the changes they are experiencing.

The 2022 Hurricane Season will be another very active and unpredictable hurricane season, with larger and more intense storms. If you live in an area affected by hurricanes, now is the time to prepare for the torrential rain, high winds, and flooding – and for the widespread loss of power, communications, and mobility – that usually comes with an above-average hurricane season.

We only have to look back at Hurricane Ida‘s landfall on Louisiana’s Gulf Coast on  September 29, 2021, and its long destructive path across the Southeast and up the Eastern Seaboard to appreciate how much more intense, widespread, and unpredictabl hurricanes have become.

On the morning of September 28th, 2021, Hurricane Ida was an 85 mph Category 1. Less than 24 hours later,  Ida slammed the Louisiana coastline with winds of 150 mph (close to a Category 5 storm).   Rapid intensification is defined as an increase of 35 mph over 24 hours before landfall. Ida took just 6 hours to reach that threshold overnight, climbing to 150 mph before landfall on September 29th.

Over ten days, Ida caused at least 91 confirmed deaths, 61% in the Northeast. The top three circumstances of death were 1) drowning (storm surge, flooding), 2) vehicular (90% of these drowned in submerged cars), and 3) power outage related (including unsafe use of portable generators).

An important part of preparing for the 2022 Atlantic Hurricane Season is understanding that Hurricane Ida was not an outlier. Instead, it is part of a dangerous trend of rapid intensification. A larger proportion of Category 4-5 hurricanes are making landfall in the U.S.,  inflicting progressively higher damage and casualties.

Climate scientist and Director of the Texas Tech Climate Center, Katharine Hayhoe, told CNN’s Rachel Ramirez that, when it comes to making it through a hurricane safely, intensity is a bigger problem than increased frequency.

As the planet heats up, 90% of the excess heat that is trapped by greenhouse gas emissions is absorbed by our oceans. That heat becomes supercharged fuel for hurricanes, increases wind speed and the amount of water that storms can hold. Over the past 15 years, the amount of heat being trapped has doubled.

After the 2020 and 2021 Hurricane Seasons, it’s hard for most of us to remember what “normal” is.  The National Oceanic and Atmospheric Administration (NOAA) computes norms based on data from a 30-year period of record, currently 1991-2020, which is updated every decade. All signs point to another “overactive” hurricane season in 2022.

The 2021 Atlantic Hurricane Season was also the seventh year in a row with at least one named storm developing before the season’s official June 1 start date. In response, in 2022, the National Hurricane Center will begin its daily tropical outlooks on May 15th instead of waiting until the season officially starts on June 1st in order to provide us with more time to prepare and more timely information.

NOW is the time to start preparing for the 2022 Hurricane Season.

Contacts, circumstances and emergency instructions can change every year. The most important steps you should take early each year

Depending on where you live, that includes:

This list will get you started, and you can find  details, links, template, and resources to at  http://www.ready.gov/hurricanes and http://www.weather.gov/wrn/hurricane-preparedness

Each year, millions in the U.S. lose power during hurricanes and tropical storms. More than just being disruptive, power outages during hurricanes and other severe weather take a direct  toll on our health and safety.  As you make your family Hurricane Plan, carefully consider whether  whether a family member has a chronic illness, other health condition that makes them vulnerable if power goes out. condition or injury or when am outage is widespread and/or length

Lost Power can mean missed alerts and loss of access to emergency support.

Increasingly, storm alerts, warnings, evacuation information, and other emergency updates  come via the internet, landline or cell phone, TV, or radio all of which depend on either electricity or a constant access to freshly charged batteries.  Studies of power outages alongside  patterns of well-being during and after hurricanes show that safety and family well-being correlates with our ability to receive alerts, and to communicate our situation if we need help.

In 2011, Hurricane Irene blasted the East Coast from Virginia to Vermont.  In the aftermath, the Federal Emergency Management Authority (FEMA) recommended that homeowners in storm-vulnerable areas purchase backup generators, and follow best practices for installation and safe operation.

How can you get ready?   The most important thing you can do is to create a WRITTEN Hurricane plan NOW and share and review it with your family and household. This basic list will get you started, and you can get more details on all of these steps, including templates for your own written plan, at http://www.weather.gov/wrn/hurricane-preparedness  and http://www.ready.gov/hurricanes

We Install Comfort, Security, and Peace of  Mind

Canter Power Systems is the largest, full-service generator installer in the nation. And with the largest inventory of Generac generators, we’re ready to get you ready for when the power goes out.

Any time a serious weather event is approaching, there are several steps you can take to ensure your generator is in operational condition. By following the steps below, you can have confidence that your generator will be ready to provide you with reliable power should you need it. 1. Make sure you lock your generator lid Protect your generator from […] 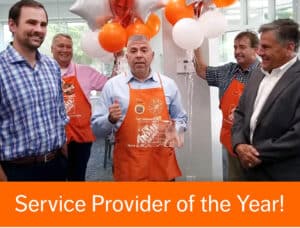 May 22, 2022, Canter Power Systems was awarded the highest honor given by The Home Depot in each of its three divisions. We were recognized as Home Depot’s Service Provider of the Year! This award is given annually to the Service Provider who has shown the most loyalty to Home Depot through sales, store engagement, customer satisfaction, and many other criteria, […] 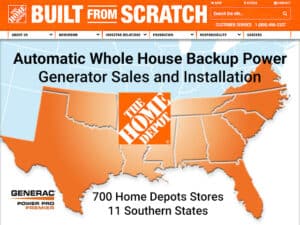 If you live in Virginia, North Carolina, South Carolina, Georgia, Florida, Tennessee, Alabama, Mississippi, Louisiana, Oklahoma or Texas, you don’t have to think too far back to remember what it’s like to lose power for days when severe weather hits unexpectedly.  But If you want to avoid power outages this winter,  the solution is as close as your local Home […]