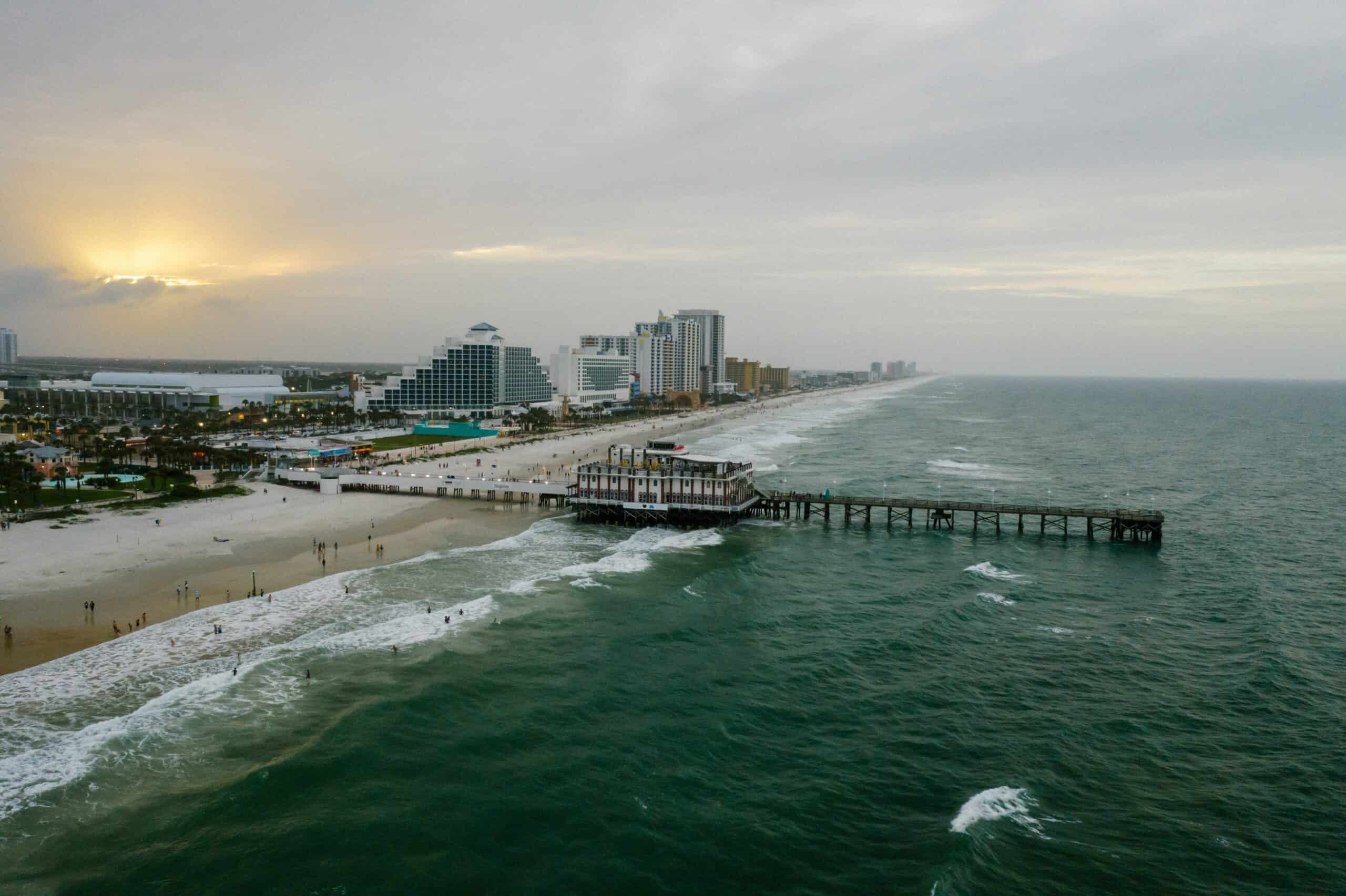 What Happens When You Don’t Have an Automatic Home Backup Power Generator in Daytona Beach, Florida

Located between St. Augustine and Cape Canaveral along Florida’s east coast, Daytona Beach – or simply “Daytona” – is at the heart of Florida’s “Fun Coast,” the two-county metro that covers Volusia and Flagler Counties, stretching from the Atlantic Ocean to the lakes and wetlands of Central Florida.

Officially known as the Deltona–Daytona Beach–Ormond Beach Metropolitan Statistical Area, the Daytona Metro has a growing population of 685,344 which also includes the cities of Palm Bay, Flagler Beach, Port Orange, and New Smyrna Beach – plus a local favorite, the Town of Marineland, with a permanent year-round population of five humans, five dolphins, five sea lions, and a walrus.

Less than an hour northeast of Orlando, the Daytona Metro includes a unique mix of busy beachfront cities, resort-style gated communities, and inland suburbs — balanced by small towns, miles of pristine, uncrowded beaches, estuaries, and preserves that protect the natural beauty and “Old Florida” roots that define this part of Florida.

If you live here, you’ve probably heard how Daytona become “The Most Famous Beach in the World.”  It’s a quintessentially Florida story of entrepreneurs and risk-takers, wide beaches, great weather, and fast cars. Founded in the 1870s, Daytona Beach really took off in 1889 when Henry Flagler purchased the Ormond Hotel and incorporated Daytona’s newly built rail line into his Florida East Coast Railway, opening the Florida Peninsula to wealthy vacationers seeking respite from northern winters.

In 1902, when the Motor City was still a gleam in Henry Ford’s eye, Daytona’s 23-mile stretch of hard-packed, coral-colored sand beaches became a mecca for automotive pioneers looking for a place to test and race their newest inventions — sort of a Kitty Hawk for cars.  And when the first land speed record was clocked along Ormond Beach at 92.307 mph in 1904, motorsports racing was born.

Drivers and machines from around the world tested themselves against Daytona Beach’s “Miracle Mile” until the final 276.816 mph record was set in 1935. Racing moved off the beach, onto road courses, and by 1959, Daytona was the home of NASCAR and the Daytona 500 International Speedway. And while much has changed since 1902, automobiles are still permitted on restricted areas of many of the city’s public beaches – but at a maximum speed of only 10 mph.

Like much of Florida, the climate is humid subtropical — 230 sunny days each year, with mild, snowless winters and hot, humid summers – although thanks to sea breezes, summer temperatures rarely go above 90 degrees. Given our location, it’s no surprise that we get 50+ inches of rain each year, especially during summer and fall when hurricanes pass nearby as they travel up Florida’s Atlantic coast or cross the state from the Gulf Coast. Their high wind and heavy rain cause serious damage and flooding, and that means widespread power outages.

Tropical Storm Elsa knocked out power to 26,000 after making landfall in Cedar Key, including more than 1,000 in Daytona. And when Hurricane Mathew pummeled Volusia County from 30 miles offshore for more than 12 hours in October 2016, it wreaked serious havoc on the power grid. More than and left 90%of Volusia County and 85% of Flagler County — 297,000 customers in all – without electricity, many for a week or longer. Less than a year later, Hurricane Irma’s center passed within 80 miles of Daytona Beach, once again leaving close to 300,000 customers without power.

And although tornadoes are usually the strongest in the spring, in this part of Florida, they can — and do — happen any time of the year. For example, in August 2020, an EF2 tornado with 100+ mph winds tore through Deland, destroying homes, power lines, and transmission equipment, leaving more than 11,000 homes and businesses without power for more than a week. We’ve even seen major tornado outbreaks in late December.

Fortunately, Florida’s power grid doesn’t experience the type of large-scale disruptions that have happened in Texas, but we’ve had a few serious wake-up calls. On February 26, 2008, for example, an incorrect switch setting at FPL’s Turkey Point Nuclear Plant snowballed into a power outage that stretched from Key West all the way north to Orlando and Daytona. Ultimately at least 4 million homes and businesses were affected, including the Daytona Metro, as bordering grids sapped energy in a domino effect. It also shut down two nuclear power plants and raised concerns about Florida Power and Light’s grid maintenance practices.

If you don’t have an automatic backup home generator, your options are limited when the power goes out for any length of time.

You can wait for it to come back on, but that means no cooking, no lights, no refrigeration, and no air conditioning – especially brutal during Florida’s hot, humid summers.  There’s no TV, no phone chargers, no power for medical devices, and often no water.  When outages are widespread, hunting down an available hotel room – or a kind-hearted friend with power who can take you in – is a big gamble, especially when roads en route to your destination are blocked by high water, fallen trees, downed power lines, or traffic accidents.

While you can’t control the weather, you CAN avoid a replay of the inconvenience, worry, and insecurity that comes every time there’s a tornado warning, a severe weather alert, or an equipment failure that could mean losing electrical power.

Before the next season brings new power outage challenges, you can explore an altogether better option—the peace of mind that comes with uninterrupted power from an automatic, whole home backup generator from Canter Power Systems.

Now, think about how your life would change if you never had to worry about being without power anywhere in or around Daytona – ever again. If the power goes out – for any reason – you can relax in the comfort and protection of your own home.  Your life goes on as usual, even if power is out for an extended period.

Whether it’s a major storm, a power grid failure, or a sunny day blip, your home backup generator turns itself on automatically, just 5 seconds after your home’s power goes off — and it stays on until utility service is restored.  You don’t have to do anything.

And if the power goes out while nobody’s home — no problem.   Whether you’re commuting home on I-4 from Orlando to Deltona, heading back from the beach, or finishing a round of golf, wherever you are, your Canter-installed Generac generator will start up automatically and run everything you count on in your house just as if you were there.

Imagine this scenario next time the power goes off anywhere in Volusia or Flagler Counties.

Whether you live in Daytona, Flagler Beach, New Smyrna, or further inland in Deltona, your lights and power are ON, even if all your neighbors’ homes are dark.

You can heat and cool your home, cook, wash dishes and clothes, bathe, charge your phones and computers and keep your refrigerated and frozen food safe.  You can provide a haven for family members, friends, or neighbors who don’t have power. And, if someone in your family counts on power to keep medicines cool or to power medical equipment, no problem.

Instead of rationing candles and flashlights, you can stay up after dark doing what you want and need to do.  Your whole family can watch TV, listen to music, read books, play games, and use computers and phones to stay in contact with your larger world. With a Generac whole home backup generator, you can even select to run only certain appliances during a power outage if you prefer. The choice is 100% up to you.

Wherever you live in the Daytona Metro,  you’ve experienced how quickly storms or other power disruptions can make life complicated and stressful.  Work, transportation, and school are disrupted. You worry when you lose contact with family and friends — those who count on you, or those you count on — even if it’s just temporary.

It’s at times like this that you will really appreciate being in your own home, sleeping in your own bed, eating the food you like, and relaxing with your favorite TV programs, books, family (and pets), not to mention having phone and internet service to keep up with school or work and to stay in contact with family and friends. Keeping up with closings and conditions out on the island and in and around Volusia and Flagler counties helps everyone in your household feel more at ease and connected.

Canter Power generator owners throughout the Deltona-Daytona metro will tell you about the peace of mind that comes with knowing they will never again have to suffer through an unexpected or prolonged power loss.  Thanks to your Canter Care Protection Plan’s 24/7 remote monitoring and automatic maintenance, you know that you are always ready for anything. You can plan far ahead by stocking up on food and supplies when it’s most convenient for you, because when emergencies strike, you know you’ll be comfortable, safe, and fully powered in your own home.

Why Choose Canter Power Systems For Your Home Generator
in Daytona Beach, Florida

It’s important to make the best choices when it comes to protecting your family and your home when bad weather strikes Daytona Beach.